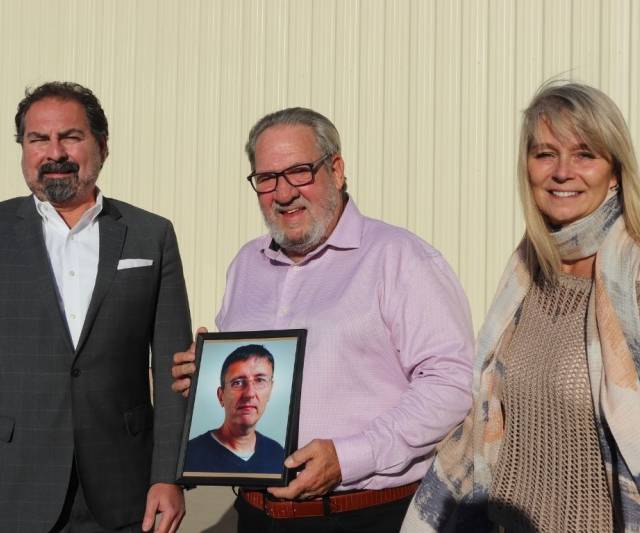 A legacy gift of $254,220 in former Intelligencer news editor Dave “Rogie” Vachon’s name was presented to Habitat executive director Hazzem Koudsi and board chair Jill Raycroft on Monday, proceeds that are coming from the sale of his home on North Park St. PHOTO: BROCK ORMOND/INQUINTE.CA

A legacy gift of $254,220 in Dave “Rogie” Vachon’s name was presented to Habitat executive director Hazzem Koudsi and board chair Jill Raycroft at the Habitat Restore on Bell Blvd. on Monday, proceeds that are coming from the sale of his home on North Park St.

Vachon, who died at the age of 54 in December of last year, was someone with a “big heart” who loved his community and would do just about anything to make it better through support for charitable groups and non-profit agencies, his longtime friend and colleague Chris Malette said.

In the months prior to Vachon’s passing, he and Malette discussed the best ways to use the proceeds from his estate, and one organization he hit on emphatically was Habitat.

“It was his idea that he could help the most people in a real tangible way,” Malette explained.

He admitted both he and Vachon were unsure what the “tattered war-time” house would go for in terms of sale price, but the current housing situation has offered something of a silver lining.

“We owe the current boom in real estate prices, unfortunately, to the fact that while families can’t afford a house, it did help with the sale of this one,” he said.

“In our wildest dreams, we never thought this house would sell for what it sold for in the end with the net proceeds, after legal fees and the rest.”

Koudsi accepted the donation with open arms, saying the money will go toward the local Habitat branch’s build fund for planning of future affordable housing projects.

“It is a large sum that will go towards us fulfilling our mandate of providing affordable home-ownership in this community, and helping families need a need to get a deserving and safe place to live.

Though it’s uncertain where this donation ranks among the most Habitat for Humanity PEH has received, Koudsi said it is one of the largest that has come to the organization.

Malette summed up the donation’s impact by giving kudos to Vachon’s heart and initiative to help families when he had no family in the area, and was not a very wealthy man.

“A lot of times you’ll hear this from some of the more well to do people in town, the Rollins, and the Parrotts, the large family estates,” he noted.

“These are the kinds of requests that can help these agencies, and they’re so appreciated by the people that receive them and we know that because we’ll see the good works that they do as a result.”

Another local charitable organization will be a recipient of a portion of Vachon’s estate, Malette noted, but details on who the group is and how much money it will receive will not be unveiled yet.

Vachon moved to Belleville from North Bay and became wire editor for the Intell in 1991, eventually working his way up. He also spent time in the sports department and as a general news reporter.

THANK YOU to our Sponsors